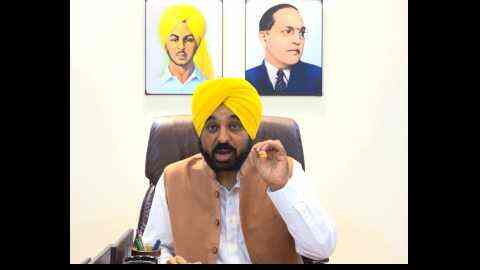 ‘pollution Politics’ Has Exposed The Anti-farmers And Anti-punjab Stance Of Bjp: Says Cm

Nov2,2022 | Jagrati Lahar Bureau | Chandigarh
SLAMS BJP AND CENTRE FOR UNLEASHING SLANDEROUS CAMPAIGN AGAINST HARD WORKING AND RESILIENT FARMERS OF STATE
BJP HATES FARMERS OF THE STATE WHO HAD SPEARHEADED CAMPAIGN AGAINST BLACK FARM LAWS
ASSERTS THAT BJP AND CENTRE HAD CREATED ROADBLOCKS IN ALTERNATIVE SOLUTIONS FOR PADDY STRAW MANAGEMENT
ASSAILS ARMCHAIR ECONOMISTS FOR DEFAMING THE FARMERS AND NOT OFFERING ANY VIABLE SOLUTION
---          Slamming the BJP for stooping too low by indulging in ‘pollution politics, the Punjab Chief Minister Bhagwant Mann on Wednesday said that the anti-farmers and anti-Punjab stance of saffron party has been exposed as it hates Punjabi farmers since they had raised banner against the draconian farm laws.
“Only three cities of Punjab figure in 32 cities of north India with poor Air Quality Index (AQI), but the BJP and Centre have unleashed slanderous campaign against hard working and resilient farmers of state by squarely blaming them for environmental hazards”, said the Chief Minister in a video statement issued here today.
The Chief Minister said that it is ironic that the Punjab farmers who had played a major role in making the country self-reliant in food production are being blamed for paddy straw burning whereas the BJP had turned a blind eye towards poor AQI in other states. He questioned the silence of BJP over far more worst AQI in Faridabad, Manesar, Gurgaon, Sonipat, Gwalior, Indore and other states where the saffron party is in power. Bhagwant Mann said that it reflects the anti-farmers and anti-Punjab mindset of the Union government and BJP.
The Chief Minister asserted that the basic reason is that the BJP hates the farmers of the state who had spearheaded a campaign against black farm laws. He said that in vengeance to this, the BJP is hell bent on defaming the state and its farmers. Bhagwant Mann said that surprisingly the BJP and Union government are continuously blaming the Punjabi farmer for environmental pollution by ignoring their immense contribution in the national food pool.
The Chief Minister reminded the centre that they had submitted a solution for the paddy straw burning by offering to jointly pay financial assistance to farmers worth Rs 2500 in lieu of not burning paddy straw. However, he said that instead of accepting this proposal the centre had blatantly refused to bail out the farmers. Likewise, Bhagwant Mann said that in order to provide a viable solution for management of paddy straw a large number of investors wanted to come to the state and set up Bio energy plants.
However, the Chief Minister said that unfortunately the centre created hindrances in it by refusing to give permission for setting these plants. He said that the Punjabi farmer is fully sensitised towards not burning paddy straw as he knows that it will adversely hit his family.  Bhagwant Mann said that the armchair economists sitting in Air conditioned offices at Delhi are not giving any solution to the farmers but they are continuously bringing disgrace to them by falsely accusing them of burning the paddy.
The Chief Minister categorically said that since it is a problem concerning the entire north India, the Prime Minister must have convened a meeting to find a solution to this issue. He said that it is a paradoxical situation that until Punjabi farmers are contributing paddy in the national pool they are food growers but after procurement is over they are being castigated on a frivolous issue.  Bhagwant Mann said that this is humiliation and injustice towards Punjabi farmers which is totally unwarranted and undesirable.
The Chief Minister said that the Punjabi farmers want to shun the practice of paddy straw burning but the centre has no solution to offer to them. He asked the BJP and centre to not threaten the Punjabi farmers by daily asking the state to lodge FIR against them. Bhagwant Mann said that instead of threatening the Punjabis farmers must be shown a way for dealing with this problem efficiently.