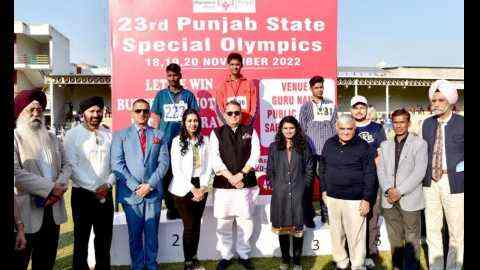 The event is being organised by the District Special Olympics Association, Ludhiana. After hoisting flag, Arora said he feels greatly honoured by attending the event as the chief guest. He said he was feeling proud to be with the special players. At the same time, he thanked organisers for inviting him to the event and assured of help in resolving all outstanding issues and problems with the state government. In-fact, he was referring to a major issue pointed out at the function that there needed to be certain changes in the sports policy of the state for special children, in which only paralympic players are considered whereas there is a demand to cover a few other specially challenged players.  Arora was apprised that specially challenged players were unable to get their due rights due to the prevailing faulty policies.

Appreciating the participants in the three-day sports event, Arora said he was really impressed after seeing the sports spirit and enthusiasm among the special players. He added many of these players were even performing much better than normal children. Referring to a point raised at the function, he assured to take up matter of creating infrastructure for disabled persons at various railway stations in Punjab.

He asked the organisers and other related organisations to submit him their points in written so that he could take up all the issues at the relevant platforms.

A total of around 600 players from 45 schools across Punjab are participating in the three-day event.