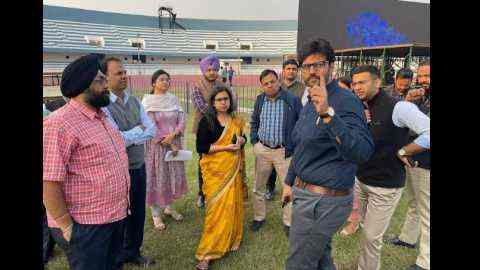 The stage was all set for mega closing ceremony of Kheda Watan Punjab Diyan on Thursday in local Guru Nanak stadium.

Punjab Chief Minister Bhagwant Mann will honour sportspersons with awards during the event.

Giving final touches to preparations of the event, Deputy Commissioner Surabhi Malik accompanied by Commissioner of Police Mandeep Singh Sidhu held a meeting with the officials and asked them to ensure that this function was held in a well organized manner.

Malik said all the arrangements for this mega event were finalized to ensure that this function was a smooth affair. She said that apart from the award ceremony, a Kabbadi match and cultural program will also be part of the mega event.

Deputy Commissioner also said that all the arrangements for the event were made to ensure that this mega event was a huge success. She asked them to ensure adequate arrangements regarding sitting, parking of vehicles, deployment of medical and fire fighting teams, security, and others were meticulously planned. She asked the officials to ensure all dignitaries, students, the public, etc must not face any inconvenience during entry at the event.