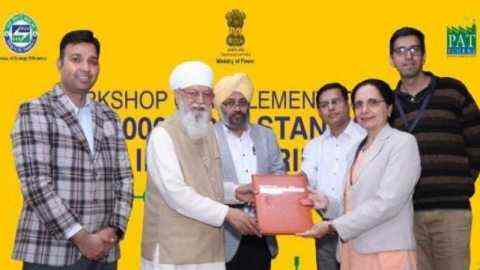 Punjab Energy Development Agency (PEDA) on Thursday organized a one-day workshop in association with Bureau of Energy Efficiency (BEE), Ministry of Power GoI on Signing of MoUs with 14 identified Industries and a technical session on “Adoption of ISO 50001:2018 Standards” at PEDA Auditorium here.

Welcoming all the participants, Chief Executive PEDA Dr. Sumeet K. Jarangal encouraged industries to implement energy efficiency measures to achieve the global mission for saving energy, environment, and climate. There were a total 40 Designated Consumers (DCs) notified by the Ministry of Power under PAT Scheme in the State of Punjab and out of 40 DCs, two industries namely NFL Bathinda and Ropar from the fertilizer sector have signed MoU with BEE for implementation of ISO 50001:2018 standards, he added.

The dynamics of industry, transport, buildings and agriculture sectors were bringing new opportunities, said he, while mentioning that energy was slowly transitioning to be demand driven rather than supply driven. He further deliberated upon the importance of bridging the communication and knowledge gap between project implementers and funding agencies for the implementation of energy efficient activities in Industries & MSMEs.

Director PEDA Mr. M.P. Singh said that PEDA has been making concerted efforts to translate energy sector strategies into actionable low-carbon solutions to increase the utilization of clean and green energy. He said that PEDA has been planning to assess potential of latest technologies such as electric vehicles (EV) and utilization of hydrogen that could invariably impact the energy demand in the transport and industry sectors, which would contribute significantly in reducing the GreenHouse Gases emission. He thanked all the participants for attending the event.