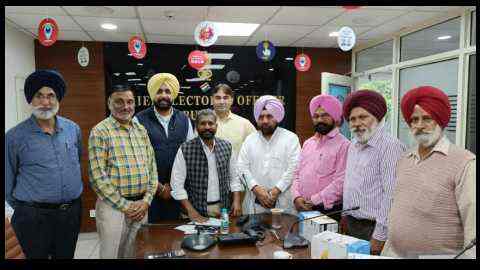 ---Chief Electoral Officer (CEO) Punjab Dr S Karuna Raju on Wednesday held a meeting with the representatives of political parties to handover the CDs of draft publication of electoral (without photos). Special drive to update the voter list - Special Summary Revision – 2023 has begun with the publication of a draft electoral roll.

Dr. Raju apprised the representatives of recognized political parties that consequent upon amendment in the Section 14 of the Representation of the People Act, 1950 and corresponding changes in the Registration of  Electors Rule, 1960, four qualifying dates including, 1st January, 1st April, 1st July and 1st October have come into force starting w.e.f. 1st August 2022.

CEO Punjab informed the representatives of political parties that as per the directions of Election Commission of India, the process of collection of Aadhar number of registered electors on Voluntary Basis is being carried out in the state of Punjab, and 66.38 percents electors have already linked their Aadhaar with Voter card.

Commencing from 09.11.2022, the revision activities will be carried out till 08.12.2022 and citizens will also get the opportunity for filing claims and objections during this period. In the meeting, Dr. Raju highlighted the robustness of the electoral process and demonstrated how transparency has been introduced at every step utilising technology.

Seeking cooperation of political parties, CEO Punjab stated that special camps will be held on 19th and 20th November, 2022, and 3th and 4th December, 2022, where Booth Level Officers (BLOs) will be present at their respective polling stations.  He also appealed to all the representatives of political parties to appoint Booth Level Agents (BLAs) and participate in the Special Camps to ensure enrolment of eligible electors.

The representatives of the political parties who attended the meeting include Harnek Singh and Sukhdev Singh of Bahujan Samaj Party, Mohinder Pal Singh of Communist Party of India and Arshdeep S Kler of Shiromani Akali Dal, Pankaj Gautam of Nationalist Congress Party and Harchand Singh Barsat of Aam Aadmi Party.