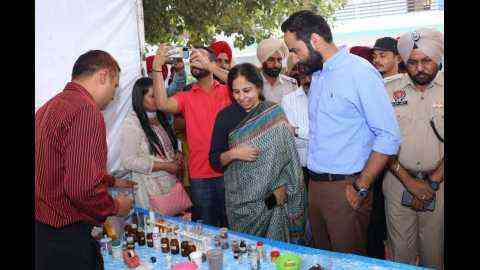 --Barnala, Nov 2 Punjab government is committed towards encouraging science temperament in the school students so that maximum number of youngsters incline towards science oriented career.
The Minister for Science and Technology Mr Gurmeet Singh Meet Hayer said during the inaugural ceremony of state level science mela that started at Govt School Sandhu Patti here today.
Addressing a gathering he said that the government has earlier held science yatra wherein the students of government school were taken to the Pushpa Gujral Science City for visit. He was of the view that such scientific events are essential for developing an informed and rationalist society.
He said that mela is being organized from November 2 to Nov 4 by Punjab State Council for Science & Technology to ignite interest in Science & Technology among students. Vigyan Mela will promote scientific concepts in local language through informative and interesting hands-on activities.
He added that students from all 115 schools of Barnala as well as from other districts are participating in the Vigyan Mela.  After kick starting the Vigyan Mela from Barnala, it will be organized in all districts of the state. The activity corners include mathematics through origami, geometry through low cost teaching aids, chemistry, food adulteration, hydroponics, science communication through puppetry and climate change & environment concepts through fun-filled activities.
Guest of Honour Dr. Nakul Parashar, Director, Vigyan Prasar (VP), in his keynote address said that the Govt. of India, as a policy initiative, is promoting Science & Technology in vernacular language to maximize its outreach. For this purpose, the Vigyan Prasar has initiated a project called SCOPE (Science, Communication Popularization and its Extension) in major Indian languages and has rolled out this program in Punjabi in collaboration with PSCST.
Dr. Jatinder Kaur Arora, executive director PSCST informed that the Vigyan Mela has been conceptualized to demonstrate Science, Technology & Environment concepts through activity corners set up by eminent experts.
She added that special vehicles called ‘Lab on Wheels’ and ‘Circus of Science’ have been specifically stationed to arouse interest among students about the subjects.
The Coordinators of the event Dr. K.S. Bath, Joint Director, PSCST, Sh. S.S.Toor, District Education Officer of Barnala and Sh. Rajesh Kumar, Principal of Govt. Sr. Secondary School, Sandhu Patti have worked extensively to attract large number of students and teachers from across the State in the Vigyan Mela which will popularize science in a unique manner.
On the occasion, Deputy commissioner Barnala Dr. Harish Nayer, SDM Gopal Singh and other dignitaries were present.