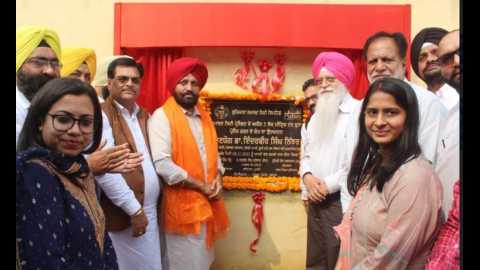 Nov8,2022 | Surinder Arora Soni | Ludhiana
*MCL to clear five lakh tonne waste at a cost of Rs 27.17 Crore under phase-1: Dr Nijjar*
Punjab Local Bodies Minister Dr Inderbir Singh Nijjar on Tuesday inaugurated the project of legacy waste bioremediation plant at Tajpur Road dump site which will clear five lakh tonnes of legacy waste under its first phase in next 22-months.
The project will cost Rs 27.17 crore and is being executed under Ludhiana Smart City Mission. The total area of landfill site is 51.36 acres which is situated around 15 km from the city. The total accumulated legacy waste at the site is approximately 25 lakh MT.
He was also accompanied by MLAs Daljit Singh Grewal, Madan Lal Bagga, Hardeep Singh Mundian, Mayor Balkar Singh Sandhu, MC Commissioner Dr Shena Aggarwal, DC Surabhi Malik, AAP District President (Urban) Sharnpal Singh Makkar, AAP District President (Rural) Harbhupinder Singh Dharaur, besides several others.
Addressing the residents, the Cabinet Minister said that the process of disposing of legacy waste accumulated at the dumpsite would be carried out through a bioremediation process in two phases. He said that work of the first phase had been awarded to Sagar Motors which will clear 1440 tons per day of waste in its plant by using Zero Landfill technology. He said that the contractor had also agreed to deploy extra machinery and complete the work well before the deadline.
Dr Nijjar pointed out that the tenders for phase-II are already floated to dispose of the remaining 19.62 lakh tonnes of legacy waste here. He said that the project would give a major relief to the residents from the foul smell emanating from the garbage dump site. He said that Solid waste management was one of the biggest challenges for cities and the Punjab government led by Chief Minister Bhagwant Mann has been making sincere efforts to make Punjab clean and green by scientifically disposing of garbage and solid waste.