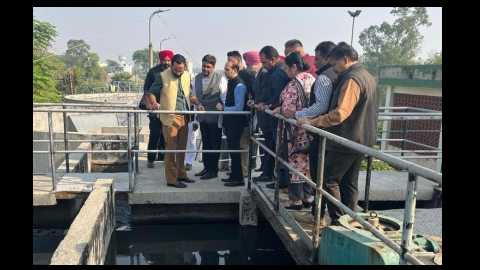 Punjab To Use Stps Treated Water For Irrigation - Meet Hayer

Facilitate farmers for using treated water in their fields

Advocates for comprehensive planning to save groundwater for future generations

Cabinet Minister of Punjab Mr. Gurmeet Singh Meet Hayer on Thursday said that the Punjab government led by Chief Minister Mr. Bhagwant Mann will ensure the use of treated water from STPs having a capacity of 2600 MLD for irrigation purposes to save the fast-depleting ground water across the state.

Mr. Meet Hayer, who also holds the Department of Environment, Science and Technology, visited the STP Phagwara to review the method of using treated water for irrigation on more than 1000 acres by farmers nearby Phagwara villagers.

It may be mentioned here that the water treated by the STP at Phagwara having a capacity of 28 MLD, is being used for irrigation on 1000 acres by the farmers with the help of an 11 km long pipeline laid by the water conservation department.  With this method, nearly 7500 million liters of underground water have been saved.

Hailing the efforts of PPCB, Sewerage Board, Water Conservation and Agriculture and Farmers Welfare Department, the minister asked them to work in unison for chalking out a comprehensive plan to use the treated water for irrigation across the state on the lines of the Phagwara STP which has also received the National Water Mission Award.

The minister also facilitated the farmers of nearby villages who use the treated water through of this plant for irrigation.

Sharing their experiences, Farmers Satnam Singh, and Palwinder Singh said that around 260 farmers nearby were using water from the plant for irrigation on 1000 acres, which has not only saved underground water and electricity but also help in reducing the use of urea.