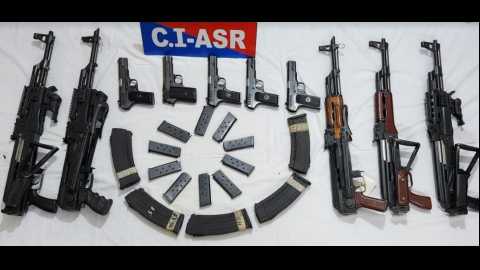 Dec3,2022 | Gautam Jalandhari | Chandigarh/amritsar
*— ON DIRECTIONS OF CM BHAGWANT MANN, PUNJAB POLICE COMMITTED TO MAKING PUNJAB A SAFE AND SECURE STATE*
*— FURTHER INVESTIGATIONS ARE ON TO TRACE LINKS OF ARRESTED PERSONS WITH THEIR PAKISTANI ASSOCIATES*
Close on the heels of recovering 13kg heroin amidst the ongoing drive against anti-social elements launched on the directions of Chief Minister Bhagwant Mann, Punjab Police, on the disclosures of arrested drug smugglers, have effectively recovered of 10 AK-47 assault rifles and 10 foreign made .30 bore pistols in past three days, said Director General of Police (DGP) Gaurav Yadav here on Saturday.
Notably, Punjab Police's Counter Intelligence (CI) Amritsar had arrested two Rajasthan-based drug smugglers— Sukhvir Singh and Bindu Singh — after recovering 13 Kg heroin from their possession near Verka Bypass in Amritsar on November 21, which further led to the arrest of their two more aides, identified as Manpreet Singh and Balkar Singh alias Lovepreet Singh, both resident of Guru Harsahai in Ferozepur, from Hanumangarh in Rajasthan, where they were staying in a rented accommodation.
DGP Gaurav Yadav said based on revelations of arrested drug smugglers, the CI Amritsar police teams in a joint operation with Border Security Force (BSF) on Wednesday, had recovered 5 AK-47 rifles and 5 foreign made .30 bore pistols along with 9 magazines concealed near pillar in the area of forward Post Teerath in Ferozepur.
"Acting swiftly on the specific inputs from CI Amritsar, BSF has recovered another chunk of five AK-47 rifles and five foreign made .30 bore pistols along with 19 magazines concealed in the area of Border Outpost Jagdish in Ferozepur on Friday late evening," he said, adding that a separate case FIR No. 35 has been registered under section 25 of the Arms Act and section 14 F of Foreigners Act has been registered at Police Station SSOC Amritsar.
AIG Amarjit Singh Bajwa said that, as per preliminary investigations, the arrested persons used to smuggle the consignment of drugs and weapons from their Pakistani associates to deliver them in different states in the country. Further investigations are on, he said.