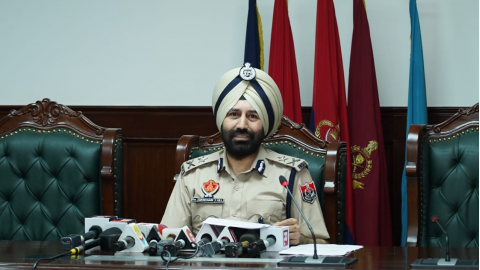 *— POLICE TEAMS RECOVERED Rs 4.49CR DRUG MONEY, 300 KG OPIUM, 197KG GANJA, 293 QUINTALS OF POPPY HUSK & 27.56 LAKHS TABLETS/CAPSULES/INJECTIONS/VIALS SINCE JULY 5* *— PUNJAB POLICE REGISTERS 5346 FIRs UNDER NDPS ACT SINCE SPECIAL DRIVE STARTED ON DIRECTIONS OF CM BHAGWANT MANN* *— DRIVE TO ARREST POs/ABSCONDERS IN NDPS ACT CASES WITNESSES SIGNIFICANT SURGE AS TOLL REACHES 383* *— 508 DRUG SMUGGLERS/SUPPLIERS HELD WITH 26.5KG HEROIN, 13KG GANJA, 17KG OPIUM, Rs 4.5 LAKH DRUG MONEY IN A FORTNIGHT* *** With the decisive war against drugs waged on the directions of Chief Minister Punjab Bhagwant Mann to root out drugs entered fifth month, Punjab Police have arrested as many as 6997 drug smugglers including 1097 big fish since July 5, 2022. The Police have registered a total of 5346 first information reports (FIRs) of which 580 are related to commercial quantity. Inspector General of Police (IGP) Headquarters Sukhchain Singh Gill, who was addressing his weekly Press Conference here on Monday said that the Police teams have recovered 259.7Kg Heroin from across the state after carrying out cordon and search operations in drug-affected areas besides laying nakas at vulnerable routes across the state. Additionally, 147.5Kg heroin was recovered by the teams of Punjab Police from Seaports of Gujarat and Maharashtra, taking the total effective recovery of heroin to 406.5Kgs in just four months, he said. Apart from seizing big-haul of heroin, the IGP said that Police have also recovered 300Kg opium, 197.2Kg Ganja, 293 quintals of poppy husk, and 27.56 lakhs tablets/capsules/injections/vials of Pharma opioids from across the state. The Police have also recovered Rs 4.49 crores of drug money from the possession of drug smugglers arrested in these four months. Giving fortnightly update, the IGP said that in last two weeks, the police have arrested 508 drug smugglers/suppliers after registering 399 first information reports (FIRs), including 54 commercial, and recovered 26.5Kg Heroin, 17Kg opium, 13.8Kg Ganja, 19 quintals of poppy husk, and 1.20 lakh tablets/capsules/injections/vials of Pharma opioids besides recovering Rs 4.5 lakh drug money from their possession. He said that with seven more Proclaimed Offenders (POs)/Absconders in NDPS cases arrested in the last two weeks, the total number of arrests reached 383 since the special drive to arrest POs/absconders was started on July 5, 2022. Pertinently, Director General of Police (DGP), Punjab Gaurav Yadav had given strict instructions to all the CPs/SSPs to investigate backward and forward linkages minutely in each and every case, especially related to drug recoveries, even if they recover a meager amount of drugs. Meanwhile, on the direction of Chief Minister Punjab Bhagwant Mann to make Punjab a drug-free state, extensive anti-drug drives have been launched by the Punjab Police to combat the menace of drugs from the border State. The DGP has also strictly ordered all the CPs/SSPs to identify all hotspots where drugs are prevalent and all top drug smugglers in their jurisdictions. He also directed the Police chiefs to effectively forfeit the property of all the arrested drug smugglers so that their ill-gotten money could be recovered.