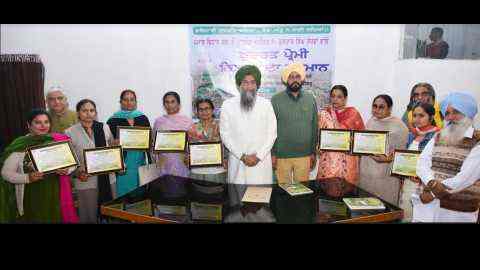 Punjab Vidhan Sabha Speaker S. Kultar Singh Sandhwan has called upon the farmers to build a people's movement to reverse the trend of fertilizers and chemicals based agriculture and to take steps towards organic farming.

Addressing the farmers during a function held in the Punjab Vidhan Sabha with the cooperation of Agricultural Heritage Mission to honor the organic agriculturists, Sandhwan said that Punjab, which was known for hygienic water, spotless air and healthy fertile land, has been turned into polluted water, poisonous air and non-fertile land due to wrong policies. He said that due to excessive use of fertilizers and chemicals in agriculture, people are suffering from diseases and are dying daily with the outcomes. He said that there is a need to move towards organic farming to bring Punjab back into the track.

Earlier, while addressing the farmers, Agriculture Minister S. Kuldeep Singh Dhaliwal said that the Bhagwant Mann government has promised to bring change in the entire system. He said that as part of this change, the Punjab government will bring its agricultural policy by March this year which will be drawing a separate outline for organic farming. Its purpose is to promote natural farming. He said that funds will be provided in the budget after the implementation of new policy. S. Dhaliwal said that farmers with less than five acres of land were given remuneration for working in their fields, so farmers with less than five acres of land should make job cards. Meanwhile, he said that during the paddy season, 30 percent less straw has been burnt as compared to last year. He expressed confidence that in the next two years the problem of stubble burning will be completely eliminated.