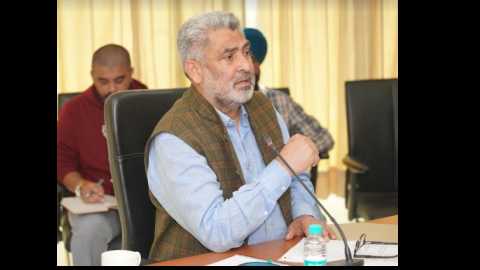 NO COMPROMISE ON TIMELY PAYMENT OF WAGES TO WORKERS AND CORRUPTION ISSUE: LAL CHAND KATARUCHAK

MINISTER DIRECTS FOR TIMELY PAYMENT OF SALARIES IN FUTURE

The Punjab Government led by the Chief Minister Bhagwant Mann is sparing no effort and stands committed to ensure welfare and lifting living standard of every section of society. As part of this, there would be no compromise on the vital issues of timely payment of wages to workers besides eradicating corruption.

These views were expressed here today at Forest Complex, Sector 68, Mohali by the Forest and Wildlife Preservation Minister Mr. Lal Chand Kataruchak during a meeting with the Janglat Workers Union.

The Minister directed the departmental officers to prepare the seniority list strictly keeping in mind the transparency factor apart from assuring that adequate action would be undertaken as soon as possible with regard to the stalled salaries under various schemes. He directed that the salaries must be paid on time in future besides giving assurance of sympathetic consideration and positive action regarding the demand for arrears of minimum wages.

As regards the issue of considering those having 5 years experience as skilled, 3 years as semi skilled and less than 3 years as unskilled, the Minister said that the proposal would soon be sent to the Labour Department. Similarly, the matter of exempting workers with over 50 years of age from typing test for promotion would be taken up with the concerned department.

Exhorting the union members to step forward for saving the environment, Mr. Kataruchak emphasized proper upkeep of the saplings so as to make Punjab clean and green. It is as part of this that the Phagwara-Chandigarh road would be beautified. He further ordered the officers to promptly initiate the process for implementing the above mentioned decisions.

On the occasion, the union lauded the decision of the State Government to restore Old Pension Scheme. The PCCF Mr. R.K. Mishra and other officers of the department were also present.