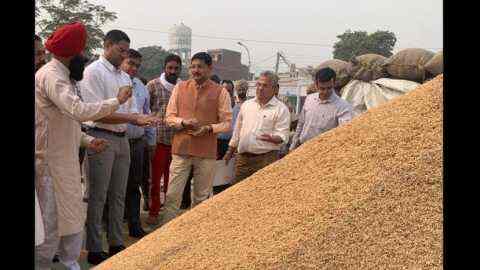 Nov1,2022 | Gautam Jalandhari | Chandigarh
REITERATES FIRM COMMITMENT OF THE STATE GOVERNMENT TO ENSURE SMOOTH AND HASSLE FREE PROCUREMENT OF PADDY
REVIEWS FUNCTIONING OF SEWA KENDRA AND AAM AADMI CLINIC AT MALERKOTLA
Principal Secretary Food and Civil Supplies, Punjab Mr. Rahul Bhandari today said that the state government led by Chief Minister Mr. Bhagwant Mann is committed for ensuring smooth and hassle free procurement of paddy in the ongoing season to facilitate the farmers'.
The Principal Secretary, who visited the grain markets at Malerkotla, Dhuri and Rajpura to review the ongoing procurement of paddy, said that the state government will lift every single grain of paddy in a smooth and hassle free manner, during the ongoing marketing season. He said that the state government has made elaborate arrangements to ensure that the harvest of farmers is lifted from the grain markets in a smooth and hassle free manner. Mr. Bhandari said that farmers will not be allowed to face any sort of problem while selling their produce in the mandis.
The Principal Secretary said that the entire process of procurement and lifting will be completed within a week. He said that till October 31, around 118.83 LMT of paddy has arrived in the state out of which nearly 116.12 LMT has been procured and 93.54 LMT has been lifted. Mr. Bhandari said that payment worth Rs 20,085 crore has been transferred so far in the bank accounts of the farmers.
The Principal Secretary said that besides procurement a robust mechanism has been evolved for the proper transportation and storage of the grains. He said that in the current procurement season 1806 total grain markets have been notified adding that 579 total temporary yards have also been notified. Mr. Bhandari said that chiefs of all procurement agencies have been asked to personally supervise the paddy procurement operations to ensure prompt and smooth lifting of paddy as per their allotted share of procurement.
Reiterating the firm commitment of the state government to procure every single grain of paddy, the Principal Secretary said that during the current procurement season not even a single complaint has been received from the farmers across the state. He said that directions have already been given to officers to make foolproof arrangements in mandis to avoid wastage of the produce. Mr. Bhandari also asked the officers to make sure that farmers do not face any sort inconvenience while selling their produce in the mandis.
Meanwhile, the Principal Secretary also inspected Sewa Kendra and Aam Aadmi Clinic at Malerkotla. Reviewing the functioning of Sewa Kendras and Aam Aadmi Clinics, he asked the officers to ensure that people get the best facilities at these places. Mr. Bhandari said that any sort of callousness in this noble cause is unwarranted and undesirable.
Meanwhile, the Principal Secretary also had detailed interaction with people at Sewa Kendra and Aam Aadmi Clinic. He was apprised that Aam Aadmi clinics are getting overwhelming response and more than 125 patients are visiting the clinic daily. People also urged Mr Bhandari to open four more such clinics in Malerkotla. He expressed satisfaction over the functioning of Clinic and Sewa Kendra adding he assured the people that every step will taken for welfare of public.