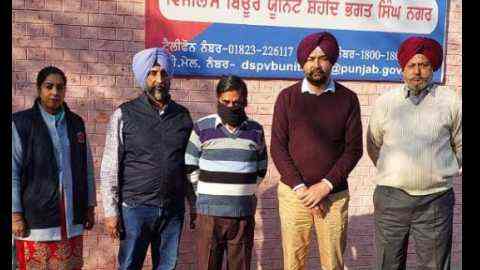 Nov21,2022 | Jagrati Lahar Bureau | Sbs Nagar/chandigarh
(Accused for in conniving with contractor, embezzling govt funds)
:::: The Punjab Vigilance Bureau (VB) during its campaign against corruption in the state, on Monday arrested a retired Assistant Municipal Engineer Banga, SBS Nagar district who was accused in defective construction of a stadium and embezzlement of public funds. He has been remanded for one day police custody by the competent court. The VB has constituted teams to arrest the other accused persons namely Contractor Rakwinder Kumar and Junior Engineer (Retired) Vijay Kumar wanted in this case.
Disclosing this here today a spokesperson of the VB said during the investigation of a complaint filed by the complainant Munish Bhardwaj, resident of Sheetla Mandir Colony, Banga, a technical team of VB has checked the Mini Stadium Banga and took samples which were also got inspected from the Institute of Irrigation and Research, Amritsar.
He informed that the VB investigation and the report received from this laboratory found that the quantity of material used for the construction of this stadium was less than the specified material.
He further added that during the probe, it has also come to light that while accepting the construction tender for this stadium, the officials/employees of the Municipal Council Banga ignored the specified instructions of the government and colluded with the contractor Rakhwinder Kumar for allotting its construction at a cost of Rs 87.45 lakhs. Apart from this, many important technical aspects were also ignored and the construction of said stadium was done without checking the strength of the pond land and without preparing the advance designs. Due to the poor quality of material, the boundary wall of stadium has prematurely damaged at many places and the stairs built for sitting in the stadium were also damaged, he said.
The spokesperson further informed that without checking the work done the accused employees has paid Rs. 39,74,304 to the said contractor while the construction work of the stadium was stopped.
In view of the said lapses and negligence, the VB has registered a case against Rakhwinder Kumar Contractor, Ranbir Singh Assistant Municipal Engineer and Vijay Kumar JE under section 13(1)A, 13(2) of the Prevention of Corruption Act and under section 409, 420, 120-B of IPC at VB Police Station, Jalandhar.