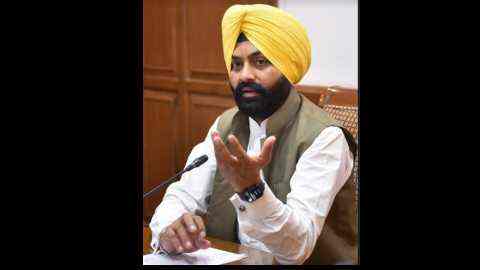 Punjab Fisheries, Animal Husbandry and Dairy Development Minister Laljit Singh Bhullar urged the farmers of the state to adopt fish farming as auxiliary occupation of the agriculture to increase their income. On the eve of the World Fisheries Day, the Cabinet Minister said that the government was providing a 40 percent subsidy for adopting fish farming, and the farmers should derive the maximum benefit of the scheme.

The Fisheries Minister, while extending congratulations to the fish/shrimp farmers on the World Fisheries Day celebrated worldwide on November 21, reiterated that the Punjab government was committed to provide all possible assistance for adopting fish farming as a profession. Chief Minister Bhagwant Mann led state government was making continuous progress in the field of Fisheries, said the Cabinet Minister, adding that special emphasis was being laid on development of infrastructure for fish farming and increasing fish production in the state.

He informed that a total 43,691 acre area of Punjab is under fisheries, from where 1,89,647 tonnes of fishes are being produced. Shrimp farming is being done in the zero-income land affected by waterlogging and saline water in Punjab, which proved to be successful in increasing the income of the farmers. At present, a total area of 1200 acres is under shrimp cultivation.

The Fisheries Minister further said, the government has been providing a 40 percent subsidy to the beneficiaries on the total cost of the projects such as preparing new ponds for fish/shrimp culture, installation of biofloc system and RAS, establishing fish feed mills and procuring fish transport vehicles etc. "Farmers should apply immediately in the concerned offices in their respective districts to take maximum benefit of these schemes of the government", the Cabinet Minister Laljit Singh Bhullar urged the farmers.