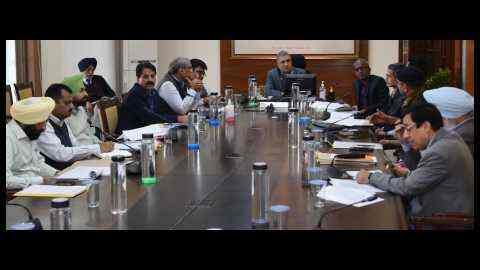 Taking serious notice of the harassment caused to the industrial sector by the already dissolved truck unions in the state, the State Government led by Chief Minister Bhagwant Mann has ordered strict action against the unions violating the rules.

Regarding the problems encountered by the industry, the Chief Secretary Vijay Kumar Janjua on the instructions of the Chief Minister, along with DGP Gaurav Yadav held a marathon meeting with senior officials of Transport, Industry and Police Departments and took serious notice was taken of the fact that despite truck unions have already been abolished vide notification dated 13.12.2017 issued by Transport Department, their high handedness is causing enormous implications for the industrial sphere thus creating a stumbling block in the progress of the State which owes its economic prosperity to the industry.

The Chief Secretary directed the Transport and Police Department to ensure strict compliance with the order of dissolution of the truck unions in 2017. The Transport department was directed to take stringent action to cancel the permits and Cooperative department was ordered to de-register such unions who are violating notification dated 13.12.2017. The Chief Secretary asked police department to issue instructions to its entire field staff regarding meticulously compliance with the orders. If any truck operator harasses anyone, the police should register a case immediately. No truck union is allowed to work, added Mr. Janjua.