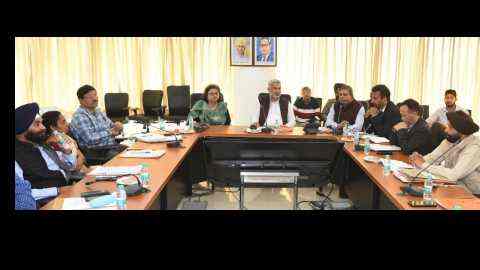 ---The Punjab Government under the leadership of Chief Minister Bhagwant Mann is fully committed to expand the forest cover in the State which stands proved by the fact that the target with regard to planting 1.20 crore saplings has been completed by the Forest and Wildlife Preservation Department.

This was disclosed by the Forest and Wildlife Preservation Minister Lal Chand Kataruchak while presiding over a review meeting of the department with the DFOs at the forest complex in Sector-68, Mohali.

The Minister was apprised that the target for next year has been fixed at 3 crore saplings for which the department would leave no stone unturned. Besides, in comparison to the Rs. 36 crore income of the Punjab Forest Development Corporation pertaining during the previous year, the corporation is richer by Rs. 29 crore during the first 7 months of the present year and is all set to surpass the previous year mark. Also, the training program of the nursery in charges across the State would commence from November 17th at Hoshiarpur with the incharges of nurseries in hilly areas being priority.

The Minister emphasized implementing various initiatives such as ‘Pavitar Van’(Planting of saplings in 1 or 2 Hectare area), Nanak Bagichi, and Shaheed Bhagat Singh Haryaval Lehar with renewed vigour so as to increase the green cover thus paving the way for a clean and green environment.

Strongly advocating the development of Sadabrast forest in Ropar and Keshopur Chhamb in Gurdaspur, the Minister batted for providing facilities in these areas to become centres of attraction. Rooting for employees of the department donning uniforms, Mr. Kataruchak said that while on one hand this would accord a new look to the department on the other this would also lead to the increasing self confidence amongst the personnel. Directing the proper upkeep of the planted saplings, the Minister said that tree guards should be set up around them apart from painting them in the departmental colours of yellow and green. He also said that certain areas such as the Phagwara-Chandigarh road must be beautified with saplings of different kind with strict monitoring mechanism in place. The Minister also asked the officers of the department to adopt a tough stance against the illegal mining.