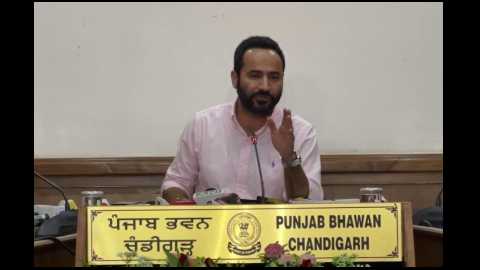 Nov16,2022 | Gautam Jalandhari | Chandigarh
-Says, futile attempts by BJP to malign Punjab’s image over law and order situation
-Unnerved BJP is using cheap and inimical tactics just to escape imminent defeat in Gujarat elections: Hayer
-Law and order is intact in Punjab and far better than BJP ruled states in the country: AAP Minister
---Decrying Union Minister Amit Shah’s bogus statement on law and order situation in Punjab, Aam Aadmi Party (AAP) senior leader and Punjab Cabinet Minister Gurmeet Singh Meet Hayer on Wednesday said that it is just a futile attempt by BJP to malign the Punjab's image to gain political mileage in the poll-bound Gujarat.
Addressing a press conference at Punjab Bhawan here, the Minister Meet Hayer said that BJP is unnerved with the rising popularity of AAP in Gujarat and they are using cheap and inimical tactics just to escape an imminent defeat in Gujarat elections. He stressed that the crime rate is far better in Punjab as compared to many BJP ruling states including Haryana and Uttar Pradesh.
Rejecting Union Minister Shah’s statement categorically, the Punjab minister said that law and order situation is intact in the border state and state government under the doughty leadership of Chief Minister Bhagwant Mann is working dedicatedly to eradicate mafia and gangster-culture, which was patronized by successive governments during their decade-old regimes. Under this drive, as many as 402 gangsters have been arrested and 363 weapons have been recovered after AAP formed the state government in the state.
He cautioned the BJP and opposition leaders to not run calumnious campaigns against the AAP government in Punjab and said that according to the NCRB report related to cases of violence in the country from 2018 to 2021, Punjab ranked 15th in the number of cases of gun/explosive related violence among the states of the country far behind Haryana and Rajasthan.
He said that Uttar Pradesh, Madhya Pradesh and Rajasthan top three states with highest gun violence cases in the country. From 2018 to 2021, 134958 cases of gun violence were registered in Uttar Pradesh, 57653 in Madhya Pradesh and 27193 in Rajasthan. While only 1820 cases of gun violence were reported in Punjab as against 8759 cases of gun violence in Haryana in the same span.  Even crime against women is also on rise in BJP states.
In the last four years, cases of gun violence in Haryana are increasing 5 times faster than in Punjab. Singers use guns and pistols in many Haryanvi songs but still Punjab is blamed for spreading gun culture and the Union minister didn’t mince a single word against Haryana, Hayer said while lashing out at the BJP.
Training guns at the opposition, Hayer said that when the Akali Dal and BJP government again formed government in 2012, over 855 murders took place in a year. BJP people are misleading and befooling the people of Gujarat by defaming the AAP party.