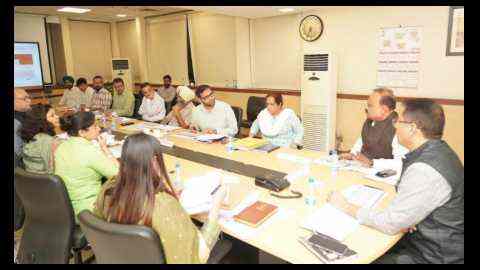 Residential & Industrial Urban Estates To Be Developed In Patiala And Sangrur: Aman Arora

Reaffirming the commitment to ensure planned development in the urban areas of the state, new Urban Estates meant both for residential and industrial purpose would be developed by the Patiala Development Authority (PDA) in near future in different cities falling under its jurisdiction, revealed Mr. Aman Arora, Minister for Housing and Urban Development (H&UD).

Chairing a meeting to review the ongoing and upcoming projects and functioning of PDA at PUDA Bhawan, SAS Nagar (Mohali), Mr. Aman Arora stated that residential and industrial urban estates in Patiala, Sangrur and Samana are proposed to be developed. He asked the officials concerned to get scrutinize the applications from the Screening Committee regarding land acquisition/land pooling in the next 15 days.

Apart from this, future projects to be undertaken by PDA were also discussed along with regulatory activities being executed. Mr. Aman Arora also directed the Chief Administrator PDA Mr. Gautam Jain to expedite the process for clearing pendency of cases of different nature as well as work for providing basic amenities in authorized projects.