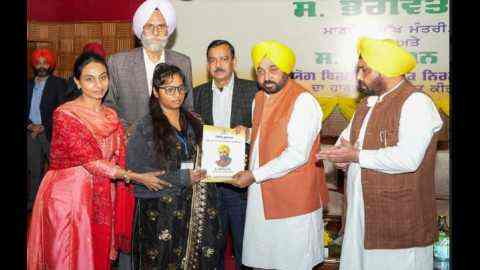 Punjab Chief Minister Bhagwant Mann on Saturday said that in a first, the state government has handed over appointment letters to more than 21000 youth in merely eight months.

The Chief Minister was addressing a gathering while handing over appointment letters to 603 newly selected employees including 476 clerks, 68 Junior Engineers (Electrical) and 59 Junior Engineers (Sub station) in PSPCL here at Municipal Bhawan.

The Chief Minister said that this massive drive reflects commitment of his government for welfare of youth as for the first time in history of the country any state government has opened doors of the government jobs for its youth in first eight  months of its tenure. He said that merit had been the sole criteria for this entire recruitment process. Bhagwant Mann said that the entire process has been completed in a transparent manner to ensure that only eligible and deserving youth get the jobs.

The Chief Minister further said that several more government jobs are in pipeline as recruitment process is already going on in many departments. He asserted that more and more unemployed youths will get government job very soon on basis of their capability. Bhagwant Mann said that getting a job is the right of every qualified person and the state government is leaving no stone unturned for it.

The Chief Minister further said that process to fill posts of 2100 Assistant Linemen is going on and will be completed by the next month. He said that the examination for these posts has been conducted and the result will be declared this week. Bhagwant Mann announced that by the next month the selected candidates will be given the appointment letters of government jobs.

The Chief Minister said that ever since he has assumed the charge of office, the youth are getting the job only on the sole criteria of merit. Bhagwant Mann unequivocally said that he neither accept anyone's recommendation nor allow anyone to do so because the youth have a lot of faith in him and he will not let this trust be broken at any cost. Describing the corrupt as the real enemies of the state, Bhagwant Mann said that our government is taking stern action against the corrupt elements.

The Chief Minister said that stern action has been taken as per the law so that it acts as a deterrent for others. He said that even some powerful former ministers have been put behind the bars for their misdeeds. Bhagwant Mann reiterated that corrupt leaders belonging to every party will not be spared and severest of severe action will be taken against them.

Another newly appointed clerk Sanjay Kumar also expressed gratitude to the Chief Minister for their appointment. He said that their appointment process had been hanging in fire from last few years  but after assuming the charge of office Chief Minister personally intervened for completing it at earliest. He said That this will enable them to live their lives with dignity and pride.

Meanwhile another clerk Hargobind Singh Marg and also profusely thanked the Chief Minister for this historic initiative. He said that this will go a long way in transforming their destinies. He also lauded the state government for completing this process purely in the basis of merit.