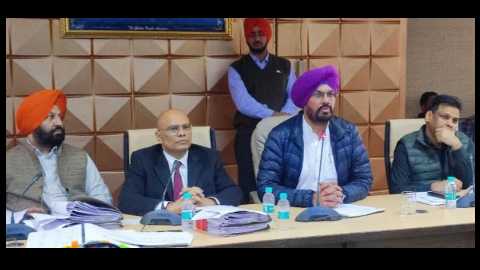 Cleaning of ponds should be done on a priority

Kuldeep Dhaliwal said that efforts should be made to clean the ponds in the villages and provide clean drinking water to the people on a priority basis. He also asked the officials for maximum utilization of the development grants fairly and warned those who show laxity in utilizing the development grants would be held accountable.

Sharing an important information, the Rural Development Minister said that the government led by Chief Minister Bhagwant Mann had launched a campaign to get rid of illegal possession of panchayat lands, as well as to identify such panchayat lands which were owned by panchayats, but it was mainly laying unidentified in the form of mountains, forests, grazing rivers, etc. The Minister disclosed that the panchayat department has identified a total of 1.28 lakh acres of such panchayat lands by matching panchayat record with revenue record, out of this identified land 42000 acres is cultivable. Out of the total 154 blocks, the work of 150 blocks has been completed for identifying such lands. Kuldeep Dhaliwal also issued directions to the officials of the department to start the process to take possession of these panchayat lands.

Officials of the department shared information during the first round of Gram Sabha which was held in the month of June in all the villages across the state and said that now the second round of Gram Sabhas would be held. The Minister issued strict directions for the complete videography and photography of Gram Sabha Sessions otherwise departmental action should be taken against those who do not do so.