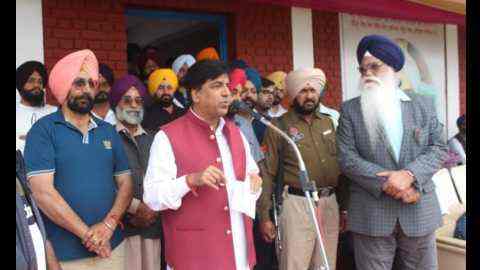 ---Punjab Water Supply and Sanitation Minister Brahm Shankar Jimpa said that Punjab government led by Chief Minister Bhagwant Mann would make Punjab of martyrs' dreams and take the state to new heights of growth and glory.
Presiding over the 5-day sports event organized to commemorate Martyrdom Day of Shaheed Kartar Singh Sarabha in his ancestral village, Jimpa said that our country would ever remain indebted to the martyrs for their supreme sacrifice. He said that Shaheed Kartar Singh Sarabha was the youngest martyr of the country who attained martyrdom at the age of 19 years. He said that the sacrifice made by the martyr Kartar Singh Sarabha would ever act as a beacon to inspire the youth to serve the nation.
Jimpa said that the state government was committed for the development of the ancestral village of  legendary hero of country who got martyrdom at such a young age. He announced to kick-start water supply projects worth Rs 1.35 crore for the village.
On the demand of upgradation of the government school of village, the Cabinet Minister said that every required work would be implemented and completed in a time-bound manner and asked the officials to send the proposals.
Earlier, he also paid tributes to the great martyr by visiting his statue in main village chowk, at the memorial and then the ancestral house of Shaheed Kartar Singh Sarabha. Later he also visited the ongoing 5-day sports festival in the village grounds, here.
On the occasion, the Cabinet Minister was also felicitated by the Shaheed Kartar Singh Sarabha Sports Club.
Prominent among present included Senior AAP leader Dr KNS Kang, besides several others.