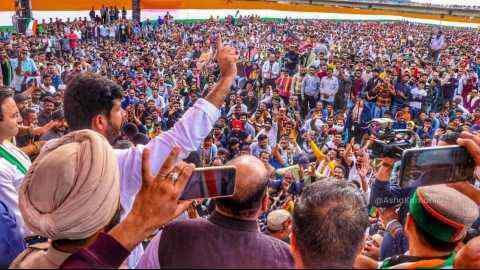 Himachal Elections : There Is So Much Panic In Bjp That Pm Has To Pursue Rebels: Warring

Punjab Congress president Amarinder Singh Raja Warring today said that there was total panic in the ruling Bharatiya Janata Party in Himachal Pradesh as it was being completely wiped out in the assembly elections scheduled to be held on November 12. Addressing a series of public meetings in support of the party candidates in Kangra district today, Warring pointed out, the desperation in the BJP camp was so much that the Prime Minister Narendra Modi had to step in and he had started calling the rebel candidates personally to withdraw from the contest. “Have you ever heard the Prime Minister of the country making personal phone calls to the candidates fighting the assembly elections?” he asked, amidst thundering applause in Nurpur where thousands of people had gathered at the election rally in support of the party candidate Ajay Mahajan. Warring lambasted the BJP government in HP saying that it had completely failed and the proof of its failure was that the Prime Minister, the Home Minister Amit Shah and all other senior leaders and ministers of the party had to camp in the state to campaign. “The despair and disillusionment narrated by Kripal Singh Parmar during this conversation with the Prime Minister is an example of how its MLAs are feeling helpless and what to speak of common people in the state”, the Punjab Congress president pointed out. “No matter who comes to campaign here, people of HP have decided and resolved to show the BJP government the door as it has completely failed in delivering on promises and commitments it had made”, he said. Warring warned the voters of Himachal against wasting their vote by being lured into voting for fake and false promises. “Ask your relatives and friends in Punjab how Punjabis are regretting so soon that they committed a big blunder in February”, he said, while claiming that people were missing the Congress rule there. He told the voters that they had a golden chance to provide the Congress party a chance for good governance. “You have the record of everyone in front of you and make a wise choice”, he urged them, saying the hill state had always progressed during the Congress rule. Warring is leading a team of senior Congress leaders and workers who are spread across the hill state campaigning for the party. He said, reports from across the state suggested that the BJP will be facing the worst kind of drubbing this time as people were completely disillusioned and alienated with the party and its government.