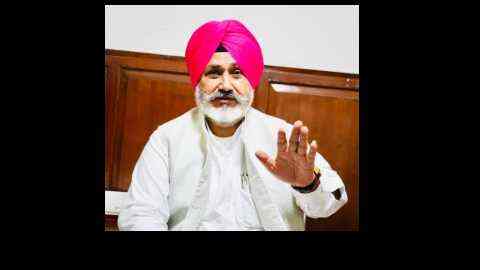 13.54 Crore Worth Free Treatment To Cancer Patients Within 7 Months Of Bhagwant Maan Government

Giving utmost priority to the health and wellbeing of the people of the state, Chief Minister Bhagwant Mann led Punjab government has so far provided free treatment worth 13.54 crore rupees to the cancer patients.

Disclosing this in a press communique issued here today, the Health and Family Welfare Minister Punjab Chetan Singh Jauramajra said that more than 1265 cancer patients have been provided free treatment worth 13.54 crore rupees under 'Mukh Mantri Cancer Rahat Kosh' in the hospitals empaneled with Punjab Government. He said that the instructions have been issued to the health officials for giving impetus to the implementation of the government's health schemes and programs so that general public may benefit more from such welfare measures.

The Minister further said that Punjab has a high prevalence of cancer and its treatment involves high costs which is not affordable for the patients belonging to the poor strata of our society. In order to safeguard the life of such poor patients this scheme has proven to be a boon for them as they can get free treatment upto 1.5 lakh rupees in any of the 19 hospitals empaneled with the state government including prestigious institutes like AIIMS Delhi, PGI Chandigarh, CMC & DMC Ludhiana, Homi Bhabha Cancer Hospital Sangrur to name few.

Health Minister further informed that any Punjab resident suffering from cancer can apply for this cashless treatment scheme at the empanelled Hospital, also now the procedure to approve such cases has been digitalised with dedicated Portal. Patients can log on to www.mmpcrk.gov.in to track the status of their application online. He said that Free Travel Facility in Punjab Roadways & PRTC Buses has been provided for cancer patients for availing treatment.

It is worth mentioning here that this scheme is not applicable to government employees, ESI employees and their dependents, those patients who have any kind of facility of medical reimbursement or have availed Health Insurance with cancer cover.