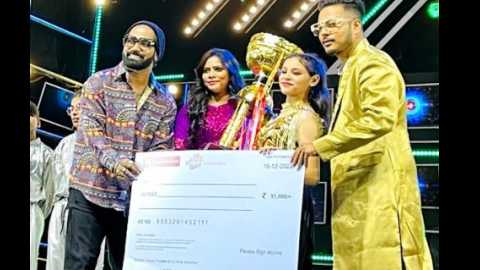 Innocent Hearts Star Geetanjali Is The Winner Of Tv Reality Show 'the Dance Icon': Won Trophy Along With Cash Prize

Nov19,2022 | Balraj Khanna | Jalandhar
A student of Innocent Hearts School, Green Model Town, has made the school proud by winning the first prize in the T.V. reality show 'The Dance Icon', which was held in Mumbai.  In this reality show, great choreographer Mr. Vaibhav Dada gave his decision as Super Judge and Mr. Parvesh Rana and Ms. Pronita as Master Judges.  Geetanjali has been awarded a beautiful trophy and a cash prize of Rs 51,000. The show will be telecasted on National Channel Zee Salaam.  The journey to reach at  such  height was a challenging one for Geetanjali.  She got selected in the audition round all over India. Then she ranked among the top 10 contestants out of a total of 2000 contestants, then stood among  8 finalists, and then stood first and received the winner's trophy which  is a matter of great pride for herself as well as her parents and the school.  Geetanjali has already received awards at national and international levels.
The management and the school principal congratulated Geetanjali and her parents and wished her a bright future.