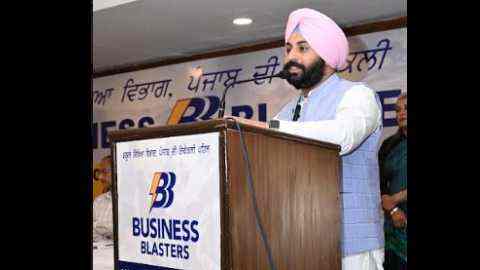 In yet another step to further strengthen the education system by the Punjab government led by Bhagwant Mann, the Minister of School Education Mr. Harjot Singh Bains on Tuesday inaugurated Business Blaster Young Entrepreneur Scheme to fulfill dream of the students studying in the government schools to become entrepreneurs.

Speaking on this occasion Harjot Singh Bains said that the government wants to make Punjab's education model better than the rest of the world, and they are working dedicatedly to ensure that the students who have studied in the Punjab government schools would not be concerned about their future.

He said that in order to boost business enterprises in the state, children of government schools will become  “job givers” and not “job seekers”.

He said that to fulfil this aim, the Punjab government led by CM Bhagwant Mann has decided to start the Business Blaster Young Entrepreneur Scheme. The students of classes 11 will be provided seed money of Rs 2,000 to start a business, which is aimed at developing young entrepreneurs at the school-level.