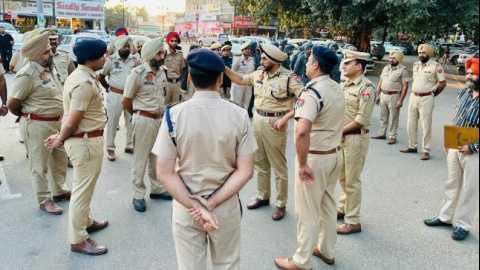 Nov11,2022 | Gautam Jalandhari | Chandigarh/mohali
*DIG GURPREET BHULLAR LEADS CORDON & SEARCH OPERATION IN DISTRICTS OF RUPNAGAR RANGE*
*— OPERATION WAS CARRIED OUT IN SEVEN SOCIETIES AND FIVE VILLAGES IN MOHALI, FATEHGARH SAHIB & RUPNAGAR*
To instill a sense of safety and security among the people, Rupnagar Range Police on the directions of Punjab Chief Minister Bhagwant Mann on Friday carried out a special cordon and search operation (CASO) in three districts including Rupnagar, SAS Nagar and Fatehgarh Sahib.
The operation was led by Deputy Inspector General of Police (DIG) Anti-Gangster Task Force (AGTF)-cum-Ropar Range Gurpreet Singh Bhullar and conducted jointly by the Police forces under the supervision of SSPs of three districts including Mohali SSP Vivek Sheel Soni, Fatehgarh Sahib SSP Ravjot Grewal and Rupnagar SSP Sandeep Garg.
The police teams have rounded-up at least 93 persons on suspicion basis after conducting the operation at seven societies including Orbit Society in Zirakpur, Park Plaza in Lohgarh, Gulmohar City in Dera Bassi, Dream House Society in Lalru, Modern Valley Society in Kharar, Cooperative Homes in Sector-91, Wembley in Sector-91, besides crowded markets in Mohali including 3B2 Market. Apart from this, the Police teams have also carried out CASO in five villages including Baliali, Bilongi, Badhmajra Colony, Jujhar Nagar Colony and Mataur.
Divulging details, DIG Gurpreet Singh Bhullar said that the police had received information from reliable sources that some of the tenants are staying there without verification process and some have even further sublet their flats. He said that Police teams have also done verifications of tenets living at rented accommodations during the checking.
He said that each society was cordoned off and a thorough search operation was carried out under the supervision of the concerned SSPs. He said that these kind of operations will be continued in the coming days as part of the ongoing drive against anti-social elements.
The DIG said that Residents' Welfare Societies have also appreciated the effort of the Punjab Police.
Meanwhile, the Police teams have been questioning the people rounded-up on suspicion for further verifications on the recovered weapons and cash.