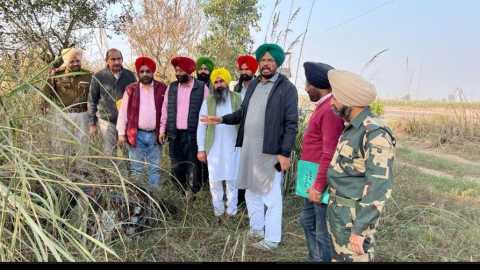 *land Purchased In Name Of Seed Farm In Village Ranian During Badal Regime Will Be Probed: Kuldeep Singh Dhaliwal*

*Dhaliwal finds 700 acres land bought with Rs.32 CR across barbed wire on international border during Badal government*
Punjab Agriculture Minister Kuldeep Singh Dhaliwal today said that 700 acres land across international border at village Ranian in district Amritsar, which was purchased on exorbitant prices by the agriculture department in the name of seed farm in 2008 at a cost of Rs.32 CR, will be throughly probed.
While addressing the media persons after visiting this land today, the Cabinet Minister said that during the Badal government, when Sucha Singh Langah was the Agriculture Minister and Kahan Singh Pannu was the Deputy Commissioner of district Amritsar, this land was bought at a very high prices. He said that then government purchased this land in 2008 at Rs.4.5 lakh per acre, which is across Ravi river and the barbed wire on international border and even one cannot enter this land without the prior permission of BSF. "An investigation will be conducted under which 'scheme' this land was purchased at that time", he categorically mentioned.
He said, "we will find the farmers who sold this land and the prior owners to found out the truth." Expressing concern over the thick and tall growth of the elephant-grass on the land, which had been cultivated for three or four times, Mr. Dhaliwal said there must be something fishy as how any then chief minister, agriculture minister and deputy commissioner, who were also belonged to farmer families can buy this land on such exorbitant prices?
He infomed that around Rs.8 crore were also spent for purchasing equipments including 30 submersible tubewells for irrigation, electricity and tractors, generators and other machinery, adding that "I am saddened to see how public money had been misused for this land, which became barren and the machinery isn't in working condition."
He said, "I will bring this matter into the notice of Chief Minister Bhagwant Mann and cultivation on this land will be considered after coordinating with the union Government as the BSF can allow to go there only."